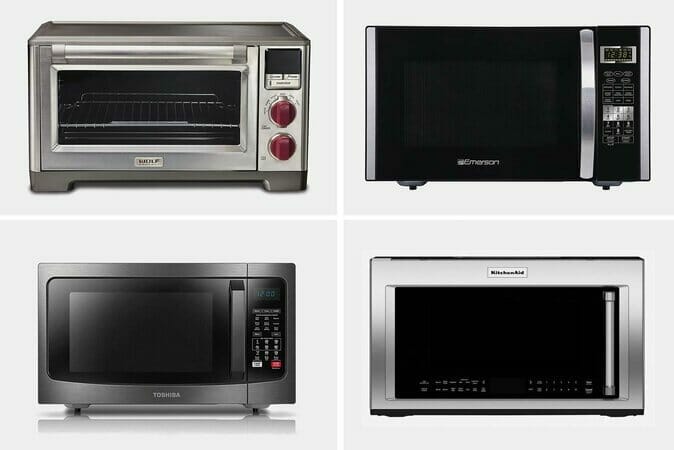 Most people that don’t know much about microwaves erroneously think there’s only one kind. Well, they’re wrong. Microwave ovens come in up to three variants.

The most basic of these three microwave types is the solo. The grill microwave is a slightly more advanced microwave machine while the convection is up there at the top.

Many things differentiate these three devices from one another. Some of them include price, watts, and other features.

There’s so much to learn about these three microwaves. If you stick around, you’ll find out the uniqueness of each type, the prices they’re sold for, and where each of them will be useful the most. Interested?

As you would expect of a basic microwave, the solo microwave oven can only perform simple tasks like reheating food, defrosting frozen food, and cooking simple food like noodles. It’s why they’ve been termed “solo.” Their design is also fundamental, and they don’t have a lot of features.

So how exactly does this device do what it does? It’s straightforward. The microwave makes use of electromagnetic radiation for whatever cooking or reheating it needs to do.

It pretty much transforms energy into heat using watts. This oven will be handy both in a domestic kitchen or a commercial one.

It shouldn’t come as a surprise that the solo microwave is the most affordable of the three microwaves.

After all, it offers the most basic functions. Because of this, you tend to find them almost everywhere—restaurant kitchens, break rooms in offices, large homes, small apartment, everywhere!

Also read: What are the best flatbed microwave ovens in UK?

Many people turn to their solo microwave oven whenever it’s time to heat last night’s dinner or any meal that has gone cold. This device can also cook noodles, minute rice, and pasta too.

Quite frankly, you may be able to get away with cooking bigger foods using this oven.

However, be warned that the food will lack the flavor you would have gotten if you used the higher end ovens. Besides, if you get a solo oven with lower watts, the food may not cook evenly.

Watts: Before any food can cook or even heat, it needs energy. Watts is what converts the energy in the microwave into heat.

The lower the watts, the longer time the food will take to cook. Higher watts take less time to cook food, which is why the higher the watt, the more expensive the microwave will cost.

The watts of a solo microwave often fall between 550 and 1,500. One thousand watts is the most popular. Solo microwaves with higher wattage are the best. They function faster and even offer some extra features.

Price: Typically, solo microwaves cost between $50-$300. The determining factors for this price range are the capacity of the oven, the wattage, the brand name, the features, and also the finish.

Microwaves with a high watt also tend to have a high oven capacity. Meanwhile, solo ovens come in any of these three finishes: aluminum, plastic, and stainless steel.

Of course, solo ovens with plastic finishes are on the cheap side. Those with aluminum are slightly more costly. However, the stainless-steel ones are the most expensive of them all.

As mentioned, the brand name also affects the cost of a solo microwave. Popular brands often cost more because they’ve become well-known and are, therefore, trusted by a lot of people.

In a solo microwave, the oven capacity is usually around 0.5 – 2.5 cubic feet, where 0.5 cubic feet is just a little more than one gallon of milk. Ovens with this capacity can hardly cook anything. Plus, their watt is always on the low side.

Features: Compared with other types of microwaves, the solo oven has the lowest number of features. Most solo ovens come with an express cooking feature, a quick-start feature for foods like popcorn and beverages, plus a button for weighted defrost. The microwaves may come with timers as well as digital clocks. Some solo oven do offer child safety features which is a protection measure for children.

Placement: You will find solo microwaves placed on countertops. However, they can also be placed beneath a cabinet just to save space. The solo is a basic oven, so you’ll find them anywhere from kitchens and dorm rooms to offices. This type of oven is great for small to medium-sized families, especially if they’ll only need to use the cooker occasionally in a week.

Also read: When Should You Buy a New Microwave?

Ever wondered why a grill microwave oven is called “grill” microwave oven? It’s because the cooker affords you that grilled taste without you actually grilling the food. Your Gill oven will do all that a basic solo oven will do and more. By “more” we mean, grill chicken, fish and also pizza.

The grill microwave actually grills food. But it does so use a unique grill heater plus some other extra accessories.

The unique heater which you can activate with just the push of a button allows the oven to grill, roast and even toast foods. Because of their additional features, grill microwaves cost more than solo ones.

Grill ovens are perhaps the least common of all three microwaves. Most people do not seem to like the idea of grilling with an oven.

It could also be that people do not consider the grilling feature such a big deal.

Grill microwaves are similar to solo microwaves in that they can also do basic cooking like heating leftovers, cooking noodles, making popcorn and defrosting frozen foods. But like we mentioned earlier, this cooker can also grill chicken, cook steak, and grill fish.

In fact, this microwave can cook any type of food, no matter the quantity. They, however, may not be the best when it comes to baking.

Watts: The watt of most grill ovens is around 900 to 1700. Remember that higher watts microwaves cost more but come with high oven capacity as well.

Grilling ovens need high wattage to be useful for any grilling so make sure to get something with at least 1200 watts if you intend to grill with the microwave.

Price : Grill microwaves sell for around $85 – $600 depending on the brand, oven capacity, finish, features, watt and even its placement. Most grilling microwaves come with stainless finish which means that the cost of most of these cookers is at the higher spectrum.

Oven Capacity: Grill Microwaves do not have high oven capacities. In fact, the oven capacity of a typical grill oven starts from 1 cubic feet to 2.5 cubic feet. Those with 1cubic feet usually come with 1000 watts.

Whenever you only wish to use the grill, you can. The power grill feature affords you this option. When you use only this feature it could take you a longer time to finish cooking. Just make sure to turn off the turntable whenever you’re using any of the grilling buttons.

Meanwhile, the eco mode is a power saving feature that allows to use less power so you won’t have to pay a lot in electricity bill.

Placement : You can place a grill microwave on a variety of places. The most common spots include, on a countertop, over the range, and beneath a cabinet.

Note that most grill ovens that are mounted over a range are placed that way because they come with extra features like lights, vents and fans, which you won’t find on the ordinary countertop grill microwaves.

Grill ovens have some advanced features that make them very useful in both commercial establishments and domestic kitchens. Single families that need the grill oven to cook several times in a week will benefit from this microwave. Plus, if you happen to live in a condo but love how grilled food taste, then this oven will prove to be a nice substitute for a real outdoor grill.

Convection microwaves combines the features of both solo and grill ovens. However, its main uniqueness lies in the fact that the microwave has the ability to also bake foods.

Convection microwaves make use of a fan and special heater to cook foods. The function of the fan is to transfer heat throughout the cooker.

C microwave offers the most features and that’s why they’re the most expensive of the three microwave types.

Uses of Convection Microwave: You can use a convection microwave to make pizza, cook popcorn, grill chicken and bake anything. This device cooks very fast. Because of their high-end nature, convection ovens are best suited for commercial kitchens and for large families.

Watts: With watts ranging from 800 to 1700, convection microwave ovens are not so different from solo and grill ovens. However, the watts of a convection appliance may not be such a big deal since the oven itself comes with a fan designed to help push heat round the oven.

Price : While watt and oven capacity are not the main determinant of a convection oven’s price, they do have a say. Of course, there are other factors like finish, features, brand, and placement. However, most convection oven’s cost between $180 and $2,000.

Features: In addition to the features of grill and solo microwaves, the convection oven also has some extra features. They are Inverter technology, smarter cooking, glass door, sensor reheating, easy cleaning and the keep warm feature.

Placement: You have three options when it comes to positioning a convection appliance: built in, over the range, and countertop. Built in placement is the costliest. With this kind of placement, the machine will cost up to 4 times a normal countertop oven.

Solo microwaves are easily affordable by most people. And since it can perform basic cooking, it’ll still do for families who don’t use their microwave a lot. Compared to convection microwave, which is extremely expensive, solo ovens are cheap and should do if minor cooking is what you want to do.

Grill microwaves gives you just a little more than solo ovens offer. However, you have to keep in mind that grill ovens often require extra accessories like grill dish. This oven is great if you absolutely love the taste of grilled food. If not, go for the cheaper solo oven.

Convection microwaves can cook virtually anything. This microwave is very high-end. So, most people use it in industrial kitchens. They offer users more features than the other two. Plus, they can bake. This microwave is a good buy if you have the budget. 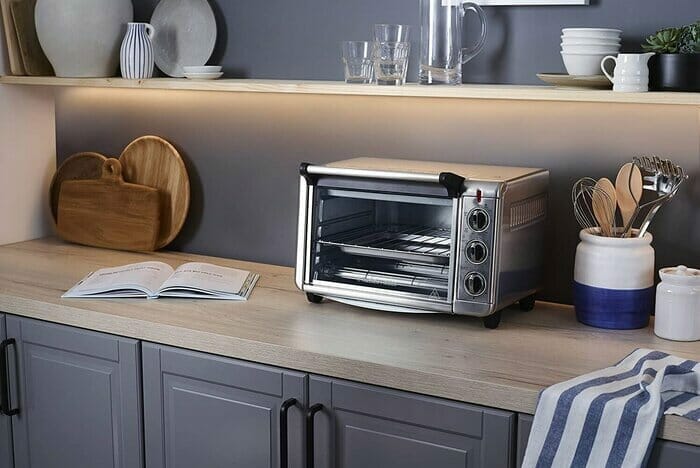 If you are looking for a cooking solution but don’t know the differences between a conventional oven and a microwave oven, you are on the right page. Microwave and microwave oven are the same devices, which is an appliance that uses microwave radiations to cook or heat eatables. However, an oven is slightly different because…

Table of Contents Russell Hobbs ‎RHFM2001B Product OverviewWho is this Microwave For?What’s included?Key Product FeaturesProduct FAQ’sAlternative Product Comparison Today, we will review the Russell Hobbs ‎RHFM2001B flatbed microwave oven. If you are looking to buy this model, you must check this first to make your decision-making process more effective. Pros: Flatbed automation allows for easy… 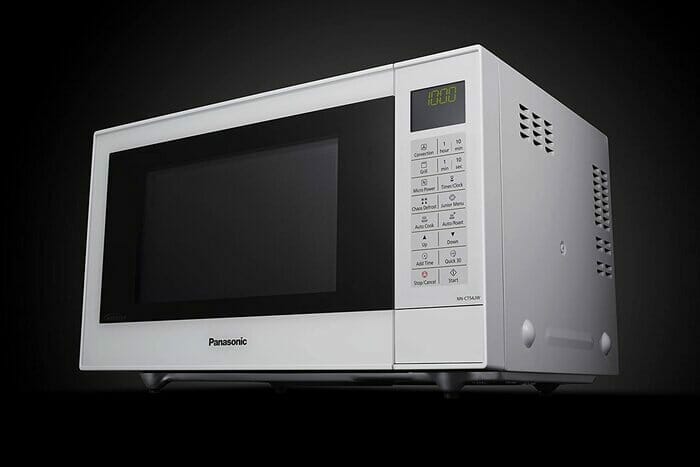 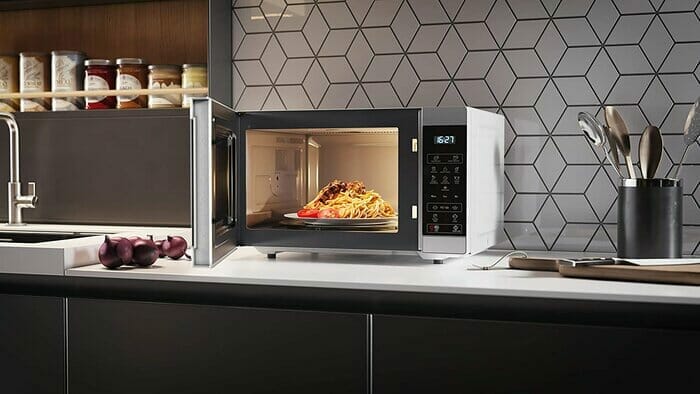 A 900W microwave is a great choice for cooking food quickly and efficiently. They are powerful, which means they cook food more evenly than lower-wattage models, also tend to have a larger capacity, so you can cook more dishes at once. However, 900W microwaves typically cost significantly more than other models with less power. If… 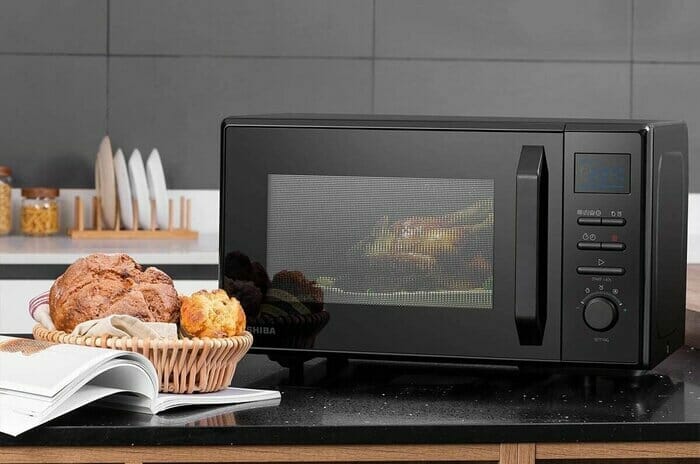 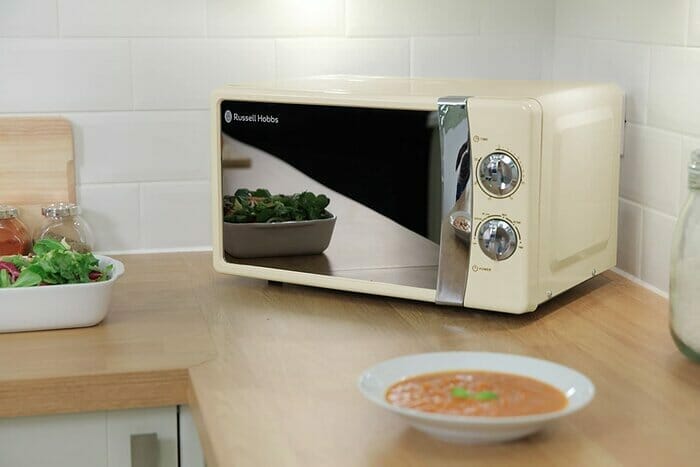